Latvia’s cultural life bristles with the old and the new, the traditional and modern, the classical and the Avante Garde. Latvians idolize their artists, composers, writers, and performers and regularly fill stadiums, concert halls, and theatres to enjoy various cultural events.

Lithuania is a spellbinding land of castles, lakes, and forests. Though relatively few knew of its charms until recently, Lithuania’s capital, Vilnius, is one of Europe’s most enchanting cities, owing especially to its Baroque old town.

Estonians have strong connections to local traditions related primarily to different dialects and reinforced by variations in customs and dress. They have colorful handicrafts, wooden saunas, and rustic food. Travel with us to experience Estonian culture’s traditional and modern sides firsthand at these markets, workshops, museums, and festivals.

From$2,299
Amber Road in the Baltics
The Marzipan Museum Room gives an overview of the history of marzipan and how a…
View Tour Details

Amber Road in the Baltics

The Marzipan Museum Room gives an overview of the history…
From$2,299
From$3,255
Baltic Route: Poland, Lithuania, Latvia and Estonia
Warsaw, it’s the Old Town, entered on the UNESCO World Heritage List – it’s where…
View Tour Details

Kaunas, second-largest Lithuania‘s city, which keeps the authentic spirit of…
From$2,150
From$2,190
Highlights of the Baltics States
This tour is about you getting to know Baltic countries: the biggest cities and getting…
View Tour Details

Highlights of the Baltics States

This tour is about you getting to know Baltic countries:…
From$2,190
From$2,715
Honeymoon in The Baltic States
Riga is an adventure for the taste buds too. The enormous Central Market is a…
View Tour Details

Honeymoon in The Baltic States

Riga is an adventure for the taste buds too. The…
From$2,715
From$3,552
Baltic Highlights and Scandinavia
This is your pan-Baltic voyage through 4 beautiful capitals with their history, architecture, taste, and…
View Tour Details

This is your pan-Baltic voyage through 4 beautiful capitals with…
From$3,552

So what is Lithuania? A mere speck on the world map to an outsider, it is much more to a Lithuanian – a country that was built over thousands of years. It is a place that intertwines the experiences of our ancestors, the battles that were fought, and the love that was shared.

Lithuania is mostly about its people. The people who built the state and the cities engendered cultural enrichment and knowledge and searched for their true identity.

Although Lithuania was first recorded as a country in 1009, the first people are thought to have settled in the territory as far back as the 10th millennium BC. The first Baltic tribes arrived 7,000 years later and settled near the Baltic Sea.

Lithuanians are proud to have been brought up in a country with such a rich historical past. They try to accentuate their national heritage by doing their best on stages and in sports arenas, being great painters and authors, singing their hearts out to thousands of people, and making their presence known with the tricolor flag. 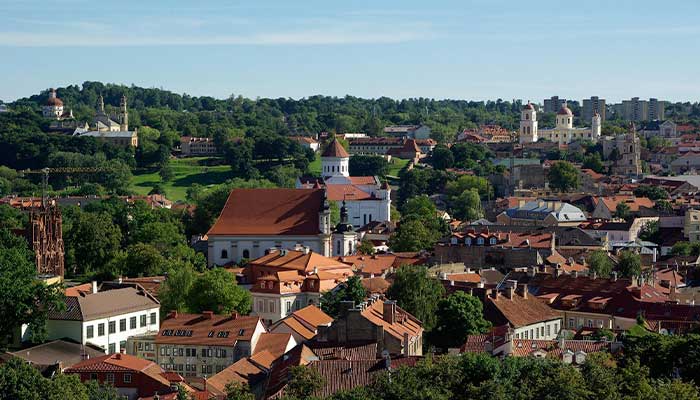 ESTONIA
1. Land of capitals
While Tallinn is the official capital of Estonia, there are several other ‘capitals’ in their own rights: Tartu is the long-standing capital of culture, Pärnu of summer, Kuressaare of weddings, Jõgeva of frost, and Türi of flowers and spring.

2. e-Estonia
Estonia is a digital society that was the first country to implement online voting in 2005, and virtually all tax returns are filed electronically. Citizens can sign legal documents remotely with their ID cards, and anyone in the world can apply to be an e-resident. And yes, it’s true – there is 4G coverage even in the middle of the woods.

3. Fairytale forests
Estonians have a tree-hugging streak, and rightly so – roughly 50% of the country is covered by forest, inhabited by all kinds of fauna, including lynxes, wolves, brown bears, foxes, rabbits, and deer. Over 380 species of birds can also be seen throughout the year.

4. Most meteorites
Estonia has the highest amount of meteorite craters per land area in the world, the most spectacular of which is the Kaali crater field on the island of Saaremaa. The giant crater, measuring 110 m across and 22 m deep, was an ancient sacrificial site.

5. Singing nation
Estonia is aptly called the ” singing nation ” with the world’s largest collection of folk songs and 133,000 recorded tunes. Estonia has aptly been called the “singing nation”. The lyrical tradition culminates in the Estonian Song and Dance Celebration every five years, a gathering of up to 200,000 performers and spectators.

6. Extreme swinging
As a child, you’ve surely dreamt of swinging so high that you go sailing over the top of the swing set. Estonians have turned this fantasy into a sport called ‘Kiiking’ (kiik is Estonian for swing). It involves strapping yourself upright onto an enormous swing and vigorously pumping your whole body with the goal of rotating 360 degrees. Your inner child will love it.

7. Visitors welcome
With 1.3 million residents and more than 2 million foreign visitors each year, Estonia is one country where annual tourists exceed the local population. However, this still leaves plenty of peace and quiet, especially deep in nature.

8. Wife-carrying champions
Estonians have a knack for peculiar sports, including wife-carrying. Though wife-carrying originates from Finland, Estonian couples won the World Championships for 11 consecutive years, from 1998 to 2008. To what do they attribute their success? Perhaps to the famous “Estonian Carry” technique, in which the woman clings upside down to the man’s back. It’s a favorite among competitors worldwide!

9. Meals for cosmonauts
Estonia contributed its part to the international Space Race by producing the first food intended for space travel at a factory in Põltsamaa in 1962, a year after Yuri Gagarin became the first man in orbit and seven years before Apollo 11 would land on the moon. Põltsamaa’s production of cosmonaut meals has ended, but Estonia’s involvement with space has not – in 2013, the country’s first satellite, the ESTCube, was sent into orbit.

10. Ecological leader
The concept for World Cleanup Day was born in 2008 in none other than Estonia when 50,000 volunteers did their part to keep local scenery pristine by collecting litter. Around 16 million people in 113 countries have now participated. The world’s biggest “positive civic action” took place on September 8th, 2018, when World Cleanup Day involved 150 countries in a full day of cleaning around the globe. Other Estonian innovators like HoseWear, Derelict Furniture, and fashion designer Reet Aus upcycle materials like old firehoses and wood scraps into stylish, environmentally-conscious creations.

11. Europe’s most famous oak tree
Of all the trees in Estonia, a towering oak in the village of Orissaare, Saaremaa, is undoubtedly the most famous. It was voted European Tree of the Year in 2015 and stands right in the middle of a football field. The story has it that during Soviet times, two tractors tried to remove it but were no match for the mighty oak.

12. Highways on ice
During the winter, cars can travel across 25 km of the frozen sea to the island of Hiiumaa on the longest ice road in Europe. A total of seven official ice roads give motorists the unique opportunity to drive to coastal islands otherwise only accessible by boat.

13. European Sauna Marathon
Europe’s largest sauna marathon takes place in Otepää. Teams from around the world race between about 20 different saunas to be crowned the winners. When they’re not busy plunging into a freezing ice hole, competitors can enjoy the wintry sights of South Estonia. 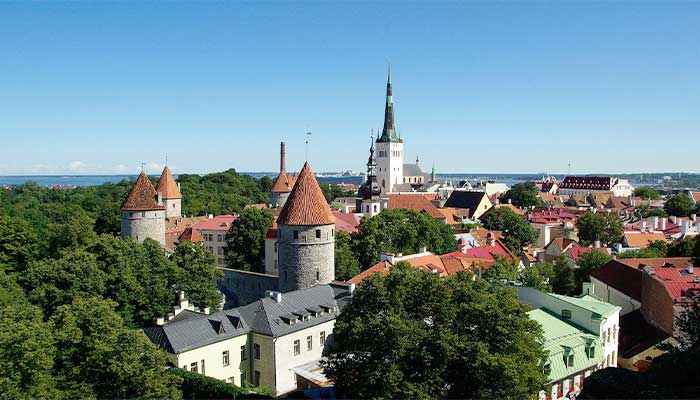 Latvia’s capital of Riga is one of the Baltic Sea’s most beautiful and historic cities. Its rich architectural heritage reveals over 800 years of cultural, economic, and political vitality and has earned its recognition as a UNESCO Cultural Heritage site. Riga is also famous for its Jugendstil architecture

The weather in Baltics is very seasonal. The average summer temperature is fairly mild, varying between 16 and 20 degrees Celsius (60 to 68 Fahrenheit), but can reach up to 30 degrees Celsius (86 Fahrenheit). Summer in Baltics tends to be very light, with 19 hours of daylight known locally as the “white nights”. Spring and autumn see frequent light rain so bring an umbrella and a waterproof jacket. In winter, the rain turns to snow, and the temperature drops below zero, so wrap up warm.
The weather forecast in Baltics is available via weather.

Lithuanian art has played a special role in our hearts from ancient times to now. The power of creativity lives inside us and allows us to take steps that lead us further. The sound of breathing may sometimes become music for a film. The wind that blows hair at sea – song lyrics. A kicked road stone – a sculpture, a friend’s letter sent from a distant place – a piece of painting. Creation does not begin and does not end. It lives inside us, allows us to take steps that we wouldn’t dare to make, and counts codes that we couldn’t grasp if not for the power of creativity. There would be no life without creation. There would be no Lithuania that we have at present. That is what makes Lithuanian culture so special.

Lithuanian nature is our greatest treasure. With its spectrum of shades of green, the freshness of its clean water, and its captivating landscapes, it seems as if the gifts of Lithuania’s nature are inexhaustible for its people and visitors. Enjoy them while protecting and nurturing Lithuania’s most significant treasure.

Estonia has a low population density and plenty of untouched nature. Three-quarters of the territory is covered by forests and bogs. Our air is among the cleanest in the world, and the freedom to roam is codified in law. The natural diversity is emphasized by not four, but five seasons.

To describe Estonian land and nature, words like clean, quiet, calm, untouched, mystical, and ancient, among plenty of others, could be used. Our nature tourism offer includes numerous products like hiking trails in bogs and mires, nature parks, birdwatching sites, bicycle tours, and canoeing. Our numerous islands, coastal cliffs, and a population that honors the green way of living make Estonia a top-notch destination for nature lovers.

Did You Know About Lithuania?

Did You Know About Latvia?

Did You Know About Estonia