Customize Your Trip
Spain occupies the Iberian Peninsula with Portugal, stretching south from the Pyrenees Mountains to the Strait of Gibraltar, which separates Spain from Africa. To the east lies the Mediterranean Sea, including Spain’s Balearic Islands.

From$5790
Wellness & Culinary Tour – Andalucia, Spain
Taking a break out of our busy lives and the daily hustle and bustle to…
View Tour Details

Taking a break out of our busy lives and the…
From$5790
From$4080
Spain – Garden Tour: The Scent of Andalucía
The Andalusian of legends is brought to life on this dream trip. As you explore…
View Tour Details

The Andalusian of legends is brought to life on this…
From$4080
From$5,393
Spain Classic Culture – The Highlights of Andalucía
On this tour, you will embark on a carefully curated magical journey around Moorish Andalusia,…
View Tour Details

On this tour, you will embark on a carefully curated…
From$5,393
From$9,400
Spain & Portugal – Grand Cultural Tour
Spain is the most visible cultural traditions, such as flamenco, bullfighting, paella, and siestas. Spain…
View Tour Details

Spain is the most visible cultural traditions, such as flamenco,…
From$9,400
From$11,540
France & Northern Spain
This fantastic itinerary begins in Bordeaux, where we invite you to explore France’s ‘Petit Paris’…
View Tour Details

This fantastic itinerary begins in Bordeaux, where we invite you…
From$11,540
From$6,500
Spain for Honeymooners
Spain really is the ideal destination to celebrate this special occasion without having to compromise;…
View Tour Details

Spain really is the ideal destination to celebrate this special…
From$6,500
From$6990
Spain – Gourmet Tour
It’s no secret that Spanish cuisine is one of the best in the world. The…
View Tour Details

It’s no secret that Spanish cuisine is one of the…
From$6990
From$3,820
A Family Adventure Across Spain
This itinerary offers a wonderful overview of the abundance of family-friendly activities available in a…
View Tour Details

A Family Adventure Across Spain

This itinerary offers a wonderful overview of the abundance of…
From$3,820
From$5260
Spain – Food Culture in Andalusia
When one imagines Andalucia, certain images are conjured up; Stunning beaches, cork tree forests, majestic…
View Tour Details

When one imagines Andalucia, certain images are conjured up; Stunning…
From$5260
From$10,630
The Best of Spain & Portugal
Starting in Madrid, Spain’s exciting capital, and ending in Porto, Portugal’s famous fortified wine-producing city,…
View Tour Details

The Best of Spain & Portugal

Starting in Madrid, Spain’s exciting capital, and ending in Porto,…
From$10,630
From$10890
The Best of Spain
Madrid, Andalucia & Barcelona – from amazing architectural sights to fascinating cultural experiences and off-the-beaten-track…
View Tour Details

The Best of Spain

Madrid, Andalucia & Barcelona – from amazing architectural sights to…
From$10890
From$4425
Spain – Madrid, Andalusia & Barcelona
The Alhambra was called because of its reddish walls in Arabic, “Qalat al-Hamra” means Red…
View Tour Details

The Alhambra was called because of its reddish walls in…
From$4425
From$3425
Spain – Triangle by Train Madrid, Valencia, Barcelona
Barcelona sited between the sea and the mountains have found a formidable balance: a foot…
View Tour Details

Barcelona sited between the sea and the mountains have found…
From$3425
From$3520
Spain – Madrid & Passion of Andalusia
Madrid is “the capital city with a thousand options!” It is welcoming and diverse. Madrid…
View Tour Details

Madrid is “the capital city with a thousand options!” It…
From$3520

About SpainSome information and tips about Spain

From riotous fiestas and sizzling cuisine to world-class museums and cutting-edge art galleries, there’s a reason why Spain endures as one of the world’s most popular destinations. Like the country’s famous tapas, Spain itself is a tempting smorgasbord of bustling cities, scenic countryside, and sunny islands, which visitors can nibble away at on repeat trips or consume in one giant feast. Either way, it is one appetizing nation. Despite its myriad attractions, most come to Spain for sun, sand, and self-indulgence, flocking to the likes of the Costa del Sol and Costa Brava, whiling away days on beaches and nights in clubs. An early pioneer of package holidays, Spain’s leading resorts have long been geared up for the mass market – from the Balearics to the Canary Islands – but it’s not all sprawling hotel complexes; quaint shing villages, bijou retreats, and secluded beaches abound if you’re looking to veer o the tourist trail. Spain is much more than holidays in the sun, though. Away from the beach, there’s an extraordinary variety of things to do; from climbing snow-capped peaks in the Pyrénées to hiking the ancient pilgrimage route of St James’s Way; from diving in the protected Medes Islands to stargazing in Tenerife. Alternatively, you could drop in on one of the country’s many festivals (think Running of the Bulls, La Tomatina, and the Baby Jumping Festival) which are madder than a box of frogs. And then there are the cities; Madrid, Barcelona, Bilbao, Seville, Valencia, the list goes on. Each of these vibrant metropolises has its distinct flavor; the Dali architecture and sweeping beaches of Barcelona seem a long way from the wide boulevards and soaring skyscrapers of Madrid (though the Catalans may wish it was further). But for all their disparities, these cities are bound by Spain’s remarkable history and enviable cultural feats, which are proudly displayed in the country’s museums, galleries, and UNESCO World Heritage Sites. Suffice to say, its popularity shows no sign of waning. 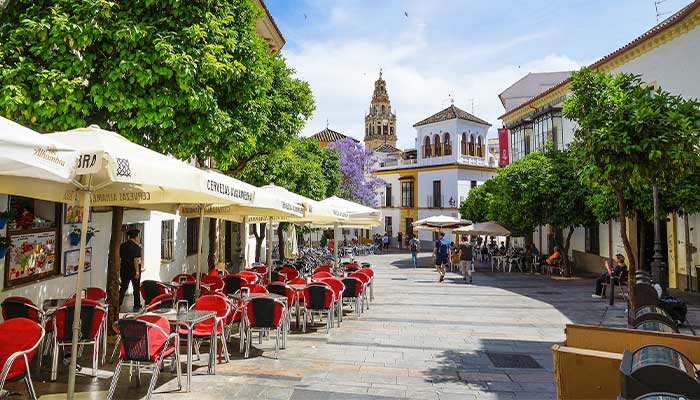 What type of clothing should I pack?
In Spain, people dress differently according to the season, the place they are going to, and the circumstances. Spanish people don’t dress up too much to go out, although it depends on where you are going. On the coast, because of the mild climate, it is usually not necessary to pack warm clothes, while on the interior, you should dress according to the season. In the interior of Spain, temperatures vary significantly from one season to the next, with icy winters and hot summers.

What is the weather like in Spain?
Spain, one of the warmest countries in Europe:
Spain has a predominantly warm Mediterranean climate, with dry summers and winters with balanced temperatures. It is no surprise that this is one of the warmest parts of Europe. Here you can enjoy more than 3,000 hours of sunshine per year.
When talking about the weather, special mention should be made of the Canary Islands. Their special location, facing the coast of Africa, gives them a benign climate with mild temperatures (22ºC year-round average on the coasts), with only minor temperature differences between day and night, whatever the season.
Nevertheless, due to Spain’s immense geographical diversity, variety is the main characteristic of the climate here.
So that if you travel to the north, to the Cantabrian coast, you will find a mild climate with high rainfall. Winters are mild, and in summer, temperatures rarely exceed 25ºC.
However, in the higher parts of the country, the climate is harsher, and it is common to see snow from the beginning of winter to the end of spring. This is the case with the Pyrenees, the mountains of Sierra Nevada, the Central and Iberian ranges, and the Cantabrian Mountains, amongst others.

What is the geography in Spain?
Spain covers an area of 505,955 square kilometers, which places it amongst the fifty largest countries in the world.
The largest part of the territory is located in the Iberian Peninsula. The remainder, approximately 12,500 square kilometers (4,800 sq. miles), are islands -Balearics and the Canary Islands- plus 32 square kilometers (12.5 square miles) that are accounted for by the cities of Ceuta and Melilla, situated on the coast of Africa. The situation of the Iberian Peninsula in the extreme southwest of Europe and only 14 kilometers (9 miles) away from the African continent endows Spain with a great strategic value: projecting into the Mediterranean on one side and acting as an intersection on the path to Africa and America on the other. The fact that a large part of Spain is peninsular also explains the length of its coastline, which runs along the Atlantic Ocean and the Mediterranean Sea. As a result of its position, between 36 and 43 degrees North latitude, the climate ranges from the mild oceanic climate in the north to the continental Mediterranean in the center and the Mediterranean in the East and South, factors which combine to create a wet Spain in the North and mountainous areas, green Spain with luxuriant forests and a dry Spain in the Mediterranean. 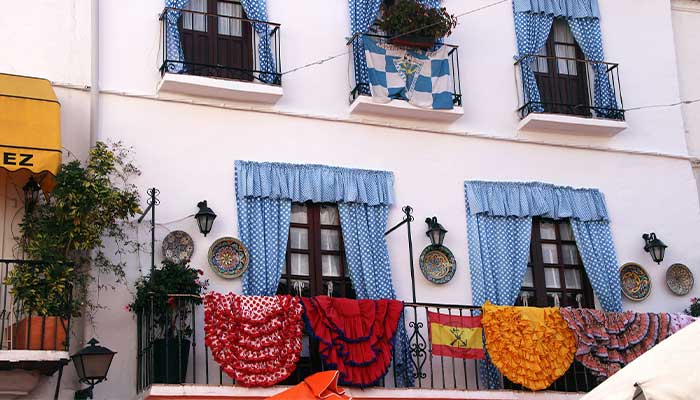 From June to August in the coastal areas, casual beach wear such as flips ops, vests, loose-fitting clothing, and shorts will suffice. It can get unbearably hot in the city, so be prepared to brave the weather with plenty of water, a hat, and sunscreen. Between high and low seasons (April-May; October-November), the climate can be unpredictable in certain parts of the country, be sure to pack your umbrella, raincoat, and a light jacket for the night.