Turkey is where East meets West, and its history is written all over the landscape. Istanbul, Cappadocia, Ephesus, Pamukkale, Troy, Mardin, Konya, and the list goes on! So many amazing places, each offering distinctly different historical and cultural treasures. Experience this amazing melting-pot of cultures on a luxury trip with your own private guide and driver. Our Turkey Destination Specialists are absolutely the best; request a Turkey tour package custom-designed specifically for you. Go on an adventure you’ll never forget!

From$5,210
Best of Turkey & Greece Journey
We exclusively prepared this fabulous multi-country tour for those who want a once in a…
View Tour Details

We exclusively prepared this fabulous multi-country tour for those who…
From$5,210
From$6,530
Turkey – West & East Tour
Southeastern Turkey has some of the country’s most incredible archeological wonders. Mt. Nemrut is the…
View Tour Details

Southeastern Turkey has some of the country’s most incredible archeological…
From$6,530
From$4,705
Turkey – The Ancient Arts of Anatolia
Antakya is one of the most exciting and entertaining cities in southern Turkey. The French…
View Tour Details

Turkey – The Ancient Arts of Anatolia

Antakya is one of the most exciting and entertaining cities…
From$4,705
From$2,185
Turkish Arts and Crafts
The tradition of weaving rugs and carpets originated in areas where the climate was not…
View Tour Details

The tradition of weaving rugs and carpets originated in areas…
From$2,185
From$4,800
Turkey – The Ancient Gods of Anatolia
With its unique stone architecture, Mardin became the second city in the world to be…
View Tour Details

With its unique stone architecture, Mardin became the second city…
From$4,800
From$6,500
Turkey – Following Alexander The Great
Admire one of the world’s best-preserved theatres at Aspendos and explore the acropolis where people…
View Tour Details

Admire one of the world’s best-preserved theatres at Aspendos and…
From$6,500
From$2934
Turkey – Journey to The Home of Mythology
Pergamon and its Multi-Layered Cultural Landscape, the only capital city from the Hellenistic period, in…
View Tour Details

Pergamon and its Multi-Layered Cultural Landscape, the only capital city…
From$2934
From$4,860
Turkey – Culinary Tours & Wine Tasting
Would you like to taste the most delicious wines in Turkey? During your tour, you…
View Tour Details

Would you like to taste the most delicious wines in…
From$4,860
From$3,660
Best of Turkey: Istanbul, Cappadocia, Ephesus and beyond
Turkish lifestyle is a vivid mosaic, juxtaposing the West and the East, the modern and…
View Tour Details

Best of Turkey: Istanbul, Cappadocia, Ephesus and beyond

Turkish lifestyle is a vivid mosaic, juxtaposing the West and…
From$3,660
From$2,604
Turkey – Istanbul, Cappadocia and Antalya
In Urgup, St Theodore and Pancarlık churches are elaborately decorated with religious art. The Chapel…
View Tour Details

In Urgup, St Theodore and Pancarlık churches are elaborately decorated…
From$2,604
From$2,196
Turkey – Aegean Pearl
The most magnificent Istanbul monuments are clustered on the historical peninsula, the triangular piece of…
View Tour Details

The most magnificent Istanbul monuments are clustered on the historical…
From$2,196
From$2,210
Turkey – Istanbul, Ephesus and Cappadocia
Thousands of years ago, a group of ancient volcanoes, Mount Erciyes, Mount Hasan, and Mount…
View Tour Details

Thousands of years ago, a group of ancient volcanoes, Mount…
From$2,210
From$4,550
Wonders of Turkey Tour
Pamukkale is a fascinating expression by mother nature and the only example of its kind.
View Tour Details

Pamukkale is a fascinating expression by mother nature and the…
From$4,550
From$2,700
West of Turkey Tour
The ancient city of Ephesus is Turkey’s most important ancient city, and one of the…
View Tour Details

The ancient city of Ephesus is Turkey’s most important ancient…
From$2,700
From$3,600
Exploring Glorious Turkey
The Cappadocia region is the place where nature and history beautifully come together. In strange…
View Tour Details

The Cappadocia region is the place where nature and history…
From$3,600

Top Things to Do

Turkey is famous for its buzzing bazaars, traditional treats, and awe-inspiring architecture and landscapes. The country also has immense cultural riches that date back centuries, which explains why it is one of the most popular destinations for cultural tours.

Visitors can experience Turkey’s culture through its food and wines or walk through and touch the ancient ruins of yesteryear.

JOURNEY TO THE ORIGINS OF ANCIENT CIVILIZATIONS

Turkey is a land of ancient wonders, with historical landmarks that date back millennia. One of the most notable is Gobekli Tepe, a site that is believed to be the world’s oldest temple, dating back to 10th century BCE. Another impressive site is Mount Nemrut, where you can find vast statues of
Persian gods that date back to the 1st century BCE. Then there is Catalhoyuk, one of the world’s oldest city settlements, which dates back to 7500 BCE. And Hattusas, the capital of the ancient Hittite Empire, which was founded in the 17th century BCE. These are just some of the many historical landmarks that can be found in Turkey. Each one is a testimony to the rich history and culture of this country.

JOURNEY TO THE HOME OF MYTHOLOGY

Turkey is home to some of the most important and well-preserved Greek and Roman ruins in the world.

Among the more than 20 Greek and Roman archeological sites in Turkey, Ephesus is the most famous one. It was once the largest city in the Roman Empire, and today it is home to some of the best-preserved Roman architecture in the world.

The ancient city of Pergamon was also an important center of learning, and its library was famous for its collection of scrolls.

Troy was the site of the Trojan War, and today visitors can see the scarce remains of the city.

Aphrodisias was once a center of sculptural production, and its ruins are home to some of the finest examples of Greek art.

Xanthos was the capital of the Lycian League, and its ruins are among the most brilliantly preserved.

Beyond these best-known ones, there are many others like Xantos, Letoon, Miletus, Lycian Rock Tombs, Zeugma, Didyma, Perge, Priene, and the list goes on. A privately-guided cultural tour of Turkey that includes some of these locations provides a fascinating window into Turkey’s rich past.

WITNESS THE GRANDEUR OF BYZANTINE AND OTTOMAN EMPIRES

Turkey is home to the most beautiful masterpieces of both the Byzantine and Ottoman Empires. The Blue Mosque and Hagia Sophia are Istanbul’s most iconic landmarks, each with its own unique story to tell.

Istanbul and the rest of Turkey is dotted with many other Ottoman and Byzantine landmarks like mosques, cisterns, palaces, and fortresses. These treasures provide a fascinating glimpse into Turkey’s past, and the powerful empires that ruled over much of the world at their time.

MARVEL AT THE CULTURE AND FOLKLORE OF ANATOLIA

Your cultural Turkey trips will not be complete without a discovery of the quaint towns and villages of Anatolia and their folklore.

As you journey through unique places like cave-villages of Cappadocia and Ottoman village of Safranbolu, admire the intricate designs of both natural and man-made marvels.

It’s a challenge to cover Turkey’s vast amount of historic and cultural treasures on a page, but here’s a glimpse of the most famous ones. If you want to explore Turkey, just contact us and talk to our Turkey Destination Specialists for insider advice and a customized itinerary. 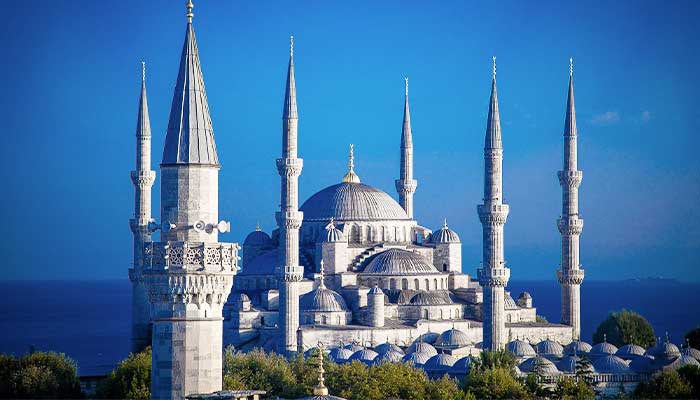 Istanbul is a city like no other, a blend of east and west where ancient mosques stand alongside modern skyscrapers. It’s a place where you can haggle for trinkets in the Grand Bazaar, then go designer-shopping in its posh neighborhoods. There’s so much to explore in Istanbul. Many of the Ottoman and Byzantine landmarks are located in Sultanahmet area in Old Istanbul. You can see the stunning Hagia Sophia and the graceful Blue Mosque right across each other, competing in beauty and grandeur. Cistern Basilica and Hippodrome are other Byzantine treasures to see. After getting delightfully lost in the Spice Market, relax with a Turkish Coffee in one of the small traditional coffeehouses in the Grand Bazaar. Cruise along the Bosphorus watching the city’s skyline and the waterfront mansions, called yali, from the deck of a ferry. Istanbul is sure to enchant you, as it has enchanted the world for millennia! 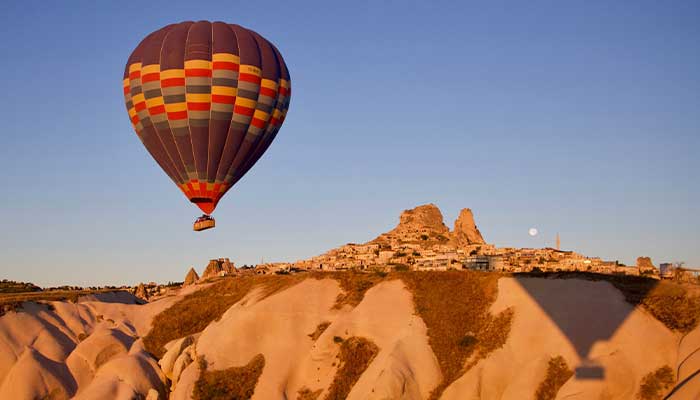 Cappadocia has one of the most unique landscapes on earth. Rock formations, called ‘fairy chimneys’ give the region an alien-like atmosphere, which is especially breathtaking when cruising on a hot-air balloon at dawn. Cultural experiences in Cappadocia include visiting the underground cities of Derinkuyu and Kaymakli, and the Goreme Open Air Museum, a UNESCO World Heritage Site, which houses cave-churches from the early Christianity period. 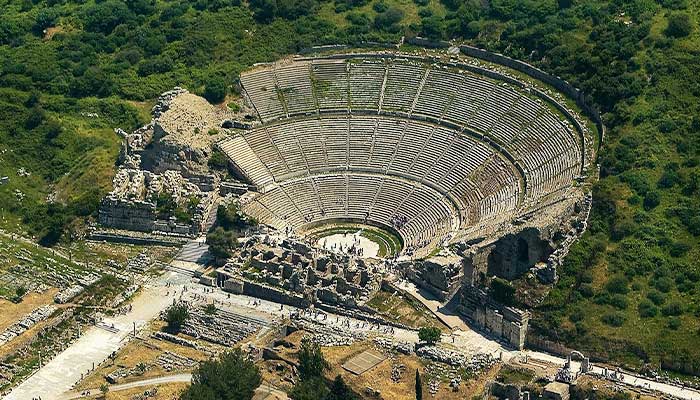 Ephesus was once one of the most beautiful and prosperous harbor cities in the ancient world. Today, it is an awe-inspiring archaeological site, with some of the most impressive Greco-Roman ruins in existence. The Library of Celsus and its Great Amphitheatre are the highlights of Ephesus, but there are many other structures from houses to public baths that can be seen. This region is also home to Temple of Artemis, one of the Seven Wonders of the Ancient World, though little has remained from this monument. 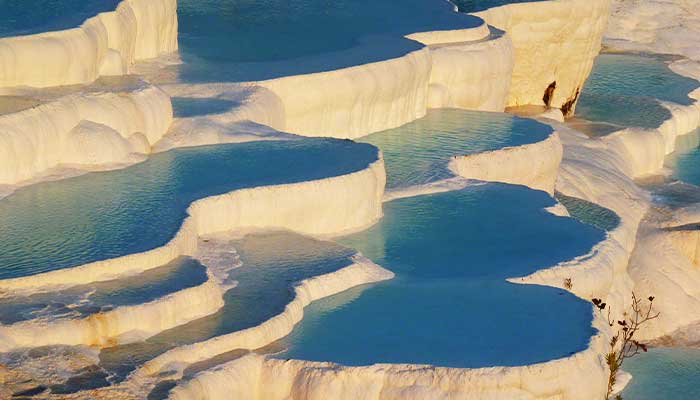 Pamukkale, meaning “cotton castle” in Turkish, is a natural wonder with its thermal pools overflowing snow-white cascading travertine terraces. The thermal pools which are open to public are said to have therapeutic properties. The area is also home to the ruins of Hierapolis, and ancient spa city in the Roman and Byzantine periods, now in the UNESCO World Heritage Sites list. A cultural tour is not complete without visiting another UNESCO site nearby, Aphrodisias, the ancient city dedicated to the Goddess of Love.

Other Ways to Discover Turkey

Top 10 Things to Do in Istanbul